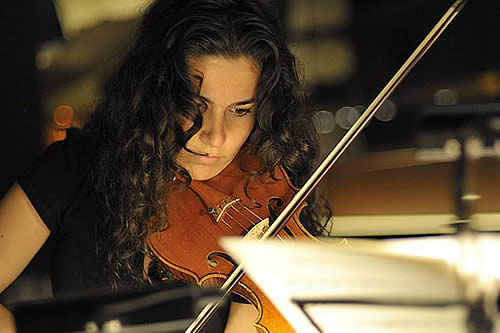 Corinne Chapelle is a French-American violinist, who continues to impress the world with the beauty and sensitivity of her music. Corinne started her violin studies as a two-year-old and gave her first concert only a year later. Her talent was nurtured at leading music schools - she studied with Yehudi Menuhin at his school in London, following which she studied at the Iuilliard School of Music and joined Pinchas Zuk.erman's class in New York. These studies were further complimented by working with such pedagogues as Ana Chumachenko, Lorand Fenyves and Iosef Gingold. Corinne has received various awards at international violin competitions. She won lst Prize at the Iulius Stulberg International String Competition, First Prize of the Los Angeles Music Center Spotlight Awards, the I ascha Heifetz Violin Award, as well as top prizes at the First Intemational Liana Isalcadze Violin Competition 2003 in St. Petersburg, Russia and the Montreal International Violin Competition. Both as a soloist and chamber musician, Corinne has already made an impressive international career. She has represented the United States around the world as an Intemational Ambassador of Music, appearing at the Senate Caucus in Washington, D.C. and premiering the Barber Violin Concerto in China. Recently, Corinne has performed with orchestras such as the Montreal Symphony Orchestra, Pacific Symphony, Salzburg Mozarteum Orchestra, Cologne Chamber Orchestra, Haydn Philharmonie, Prague Chamber Orchestra, Polish Radio Chamber Orchestra "Amadeus", as well as the Shanghai and Beijing Philharmonics. She has also performed in many of the world's leading concert halls, such as the Theatre des Champs- Elysées in Paris, the Mozarteum in Salzburg, the Kolner Philharmonie, the Haydn Saal at the Esterhazy Palace, the Prinzreg ententheater in Munich and the Great Hall of Zurich's Tonhalle. Corinne's global career has taken her to leading festivals around the world, including the Salzburg and Lockenhaus Festivals in Austria, the Aspen Music Festival in Colorado, the Kuhmo Chamber Music Festival in Finland and the Intemational Musicians Seminar at Prussia Cove in England. Her numerous collaborations have been with artists such as Fabio Biondi, Adam Fischer, Alban Gerhardt, Gary Hoffman, Liana Isakadze, Konstantin Lifschitz and Alexander Lonqui ch. As well as appearing intemationally on television and radio, Corinne has been featured on recordings for Naxos, JPC and Guild Music.