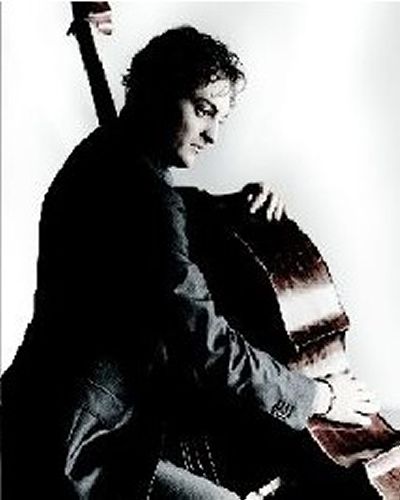 After graduating from The Academy of Music in Podgorica and taking his M.A. at The Faculty of Musical Art in Belgrade, the double-bass player Zoran Marković continued his studies with renowned pedagogues in Venice, Cremona, Munich, Salzburg. During his study, he was awarded numerous prizes at competitions at home and abroad. As a member of the Slovene Philharmonic String Chamber Orchestra he was awarded the Prešeren Fund prize (the prestigious Slovene prize) in 1999, the O. ?upančič prize in 2004, and the J. Betetto prize in 2006. Zoran Marković performs in Slovenia and abroad as a soloist, with renowned orchestras and chamber musicians. He has been successfully performing as a soloist with the Slovene Philharmonic Orchestra, the Belgrade Philharmonic Orchestra, The RTV Slovenia Symphony Orchestra, Detmolder Kammerorchester, Orchestra di Padova e del Veneto, Nuova Orchestra Ferruccio Busoni, the Slovenicum ensemble, the Strings Chamber Slovene Philharmonic Orchestra, St. George's Strings, the Niš Symphonic Orchestra... He performed at the Aspecte Salzburg, Neuebühne Villach, Serenate nel Chiostro, Trieste Prima, I suoni delle Dolomiti, Akzente-Neue Music in Klagenfurt, Ljubljana Summer Festival, Grad teatar Budva, PAC Murska Sobota, A Tempo Podgorica, Oxford Chamber Music festival, Osnabrücker Musikfestival »classic con brio«, Düsseldorf ChamberJam, Stiftfestival, Gauting München, The Schloss Elmau, Holstebro “Klassiske Dage”, Storioni Festival, Kuhmo Chamber Music Festival and many others. From 1990 to 2004 he was the head of double basses of the Slovene Philharmonic Orchestra. From January 2004, he is employed as a senior lecturer at the Academy of Music in Ljubljana. He has been a permanent external associate of the RTV Symphony Orchestra as a double-bass soloist since 2006. He also acts as a professor at the International Summer Academies of Music in Austria, Italy, Holland, England, Finland and Germany. In recent years, he has been dedicated to conducting symphonic and opera music and is very successful in it. As a permanent guest conductor, he collaborates with the Austrian Symphony orchestra Orkesterverein Feldkirchen. Kontakt: Zoran Marković Ramovševa ulica 18 SI - 1100 Ljubljana Slovenia, EU E-mail: info@zmtailpiece.com Mobile: +386 41 520 42

Nicholas Santangelo Schwartz, double bassist in the Royal Concertgebouw Orchestra, is a first prize winner of multiple international competitions, including being the youngest winner ever of the International Society of Bassists Solo Competition and commission prize. He was also the first double bassist to win (in an unanimous vote) the Stulberg International String Competition and its Bach Festival Society Award in its 43 year history.Nicholas joined the Concertgebouw Orchestra in 2013 and formerly played with the Berlin Philharmonic as a member of the Karajan Akademie, and in the USA with the Boston Symphony and Pops orchestras. In addition to being a long time member of the Verbier Festival Chamber Orchestra, he was guest artist at multiple international chamber music festivals. He is a guest professor of double bass at the Royal Conservatory in The Hague.

Nicholas performs on a regular basis with top artists such as Daniel Rowland, Eldbjørg Hemsing, Anna Fedorova, Olivier Patey, and Benedict Kloeckner. In addition to being a world class bassist, Nicholas is also an active cellist. He is the only performer who plays at an artistic level on both instruments and often performs on both the double bass and cello in the same programs. With world renowned concert pianist, Anna Fedorova he has formed the “Oyster Duo”, performing across Europe, Ukraine and the US.

In other musical genres, Nicholas feels equally at home. As a jazz bassist he won his first international competition at Carnegie Hall at the age of 15 with the “Midday Jazz Quartet”, receiving the Grand Prize in the Chamber Music Foundation of New England International Chamber Music Competition. He shared the stage with distinguished artists such as Mark O'Connor and Russell Malone and Clark Terry.

Originally from Brookline, Massachusetts (USA) Nicholas resides in Amsterdam, The Netherlands. In his youth, Nicholas was a competitive skateboarder, having been twice the 15 and under champion of Boston. He then completed an undergraduate degree at Boston University, where he received the Zulalian Foundation Award. His teachers include Edwin Barker (Boston Symphony principal double bassist) and Matthew McDonald (solo bassist of the Berlin Philharmonic) at the Karajan Academy in 2012-13.

Nicholas plays double basses by Gaetano Antoniazzi (1872, Milan) and Bernhard Simon Fendt II (London, 1840) on loan from the Foundation Concertgebouworkest and a cello by Johannes Theodores Cuypers (1788, The Hague) on loan from the Nationaal Muziekinstrumenten Fonds. He is a sponsored artist of Pirastro strings.