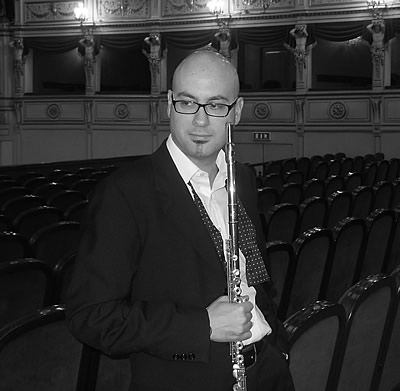 Giorgio Di Giorgi was born in 1972 in Erice. He started early in studying the flute under the guidance of Maestro G. Maduli; he graduated at the age of 15 at the Conservatory "A. Scontrino "of Trapani and he scored full marks cum laude. Then continued to the School of Music of Fiesole with Mario Ancillotti and the Superior Conservatory of Geneva with Maxence Larrieu, where he received the Prix de Virtuositè at 19 years. He furthered his studies with M. Marasco, E. Pahud and A. Nicolet at Chigi of Siena, where he won two scholarships . He originally started the work of the first flute within the Italian Youth Orchestra, and he has held the same role iin the orchestras of several theaters such as the Carlo Felice in Genoa, La Fenice in Venice, Teatro Comunale di Bologna, the Maggio Musicale Fiorentino, each one directed by masters such as CM Giulini, G. Sinopoli, L.Berio, N.Marriner. He is first flute of the Teatro Verdi in Trieste since 1997. He made his debut as a soloist at the Victoria Hall in Geneva with the Camerata Lysy, and then he has performed with the Belgrade Strings to Kolarac of Belgrade, with the Orchestra Sinfonica Siciliana and the Philharmonic's Verdi in Trieste. He has achieved great success with a concert of Mozart, Mercadante and Vivaldi. He has given concerts that have been broadcasted by Radio Rai, the Slovenian Radio, and also by the Radio Television of Serbia and he has recorded for Bongiovanni label of Bologna in international distribution. He obtained the eligibility to teach in 1992 as a result of a ministerial competition, and therefore he teaches flute at various conservatories since the age of 19 and he has recently been invited by the Conservators of Trieste and Udine to hold masterclasses on orchestral and for solo flute repertoire.